Dan Hall, who’s 51, has been living at MHA’s Safe Haven residence in Westfield, working toward living in his own place. Safe Haven is a transitional shelter where adults who are chronically homeless and have a mental health diagnosis may reside for up to two years while they get help overcoming barriers to housing. Started in May 2016, Safe Haven connects persons served with community resources, such as medical, mental health and money-related services. In addition, Safe Haven staff supports them in developing coping/symptom management skills and life skills so they are better equipped to live independently.

Dan says he shares similarities with others who took the proverbial wrong path in life, but that’s only part of his story. “I grew up in a small Massachusetts town,” Dan recalls. “At 13, I started my journey by smoking cigarettes. My friends and I would hang out at the roller skating rink on Friday nights, smoking and thinking we were cool. Then I was introduced to alcohol during a bonfire on the lake. Cigarettes and drinking led to smoking marijuana, daily. I went from president of my class to failing four subjects.”

Over the years Dan held some good jobs in sales, but he also used mushrooms, cocaine and crystal meth, and he spent time incarcerated. He recalls ups and downs, but he talks with stunning clarity about a defining moment involving his second wife.

“On April 13, 2015 a dog came to our apartment,” he recalls. “She wanted to keep it and name it Mystery because we didn’t know where it came from. The apartment was a block from the train tracks, so she took the dog out near the tracks to do its business. I went out near her and the dog was sitting right at her side. It really liked her. Then the crossing arms came down for a northbound train. The dog walked back to the tracks. My wife tried to catch it but I could see she was having a seizure, right there on the tracks. I ran up and reached to pull her off the tracks, but I was too late. The train hit her and sent her flying. I put my fingers on her neck. No pulse. I put my head on her chest. No heartbeat.”

His wife’s death sent Dan into deep depression, and his emotional pain masked a different problem. “On January 1, 2016, I went to the hospital because I wasn’t feeling well,” Dan remembers. “I was diagnosed with congestive heart failure. My heart was working at 15% of what a normal heart works at. The doctor told me if I had waited two months I would have been dead. My first reaction to this was I wish I had waited. Instead, I saw it as a wakeup call. When I got out of the hospital, I put myself into detox on January 8, 2016. I started to see things with a clear mind. I went to meetings and surrounded myself with positive people. At one meeting I was told by my sponsor Matthew B that he was going to love me until I loved myself.”

“Most people in Safe Haven have had a lifetime of mental health issues, but Dan’s started as an adult,” said Samantha Gulsvig, Program Supervisor for MHA’s Safe Haven Program. “With Dan, mental health challenges started with PTSD (post-traumatic stress syndrome) after seeing his wife killed. It even progressed to a suicide attempt. It can be hard for adults to accept that they have a sickness that is chronic. It took Dan some time, but he made the choice to stay clean and sober and to get help for his mental health. He’s accomplished so much.”

“My wife dying saved me,” Dan says. “It’s hard to accept that, but I think it’s why I’m where I am now. I decided to let God into my life and I’m excited about that. I take personal accountability for things that happened in my life and I try to take tragedy and turn it positive. I’m blessed beyond belief to be where I am, living in transitional housing at Safe Haven and getting support from positive people.”

Dan says being at Safe Haven feels like home. “Look at me now. I’m clean and sober. With help from Samantha and people she connects me with, I will be able to do more for myself. One of my goals is to become a Recovery Coach, a peer specialist who helps people just getting started in recovery. I have to apply and get certified at the program, but I know I can become a role model for people. I’m going from Impossibleto I’m possible.” 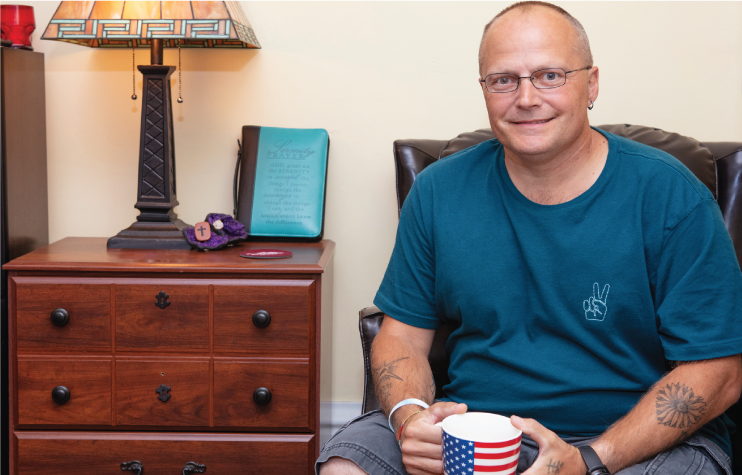