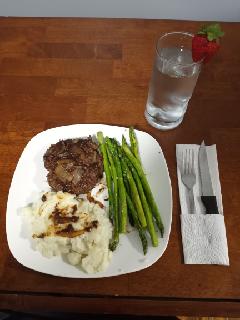 When asked about “independence,” many people may immediately think on July 4th: Independence Day. But for brain injury survivors or young adults in transition who are supported through MHA programming, opportunities to celebrate independence come every day of the year. Meet Alan and “Victoria.”

Alan, who regularly attends MHA’s Resource Center day program in Springfield is 66 years old. Many years ago he was hit by a vehicle while riding his motorcycle. It was a serious accident that resulted in a traumatic brain injury. The Resource Center helps brain injury survivors overcome barriers through natural, sustainable community supports and life-stage appropriate accommodations in relevant parts of their lives.

After his accident, Alan needed a lot of care, which had him living in a nursing home for a long time. Eventually he was able to move into a group home and attend a day program, but it didn’t give him the sort of independence he wanted. When he learned about the Resource Center, he jumped at the opportunity to engage in the program.“I like the freedom to do things I want to do,” Alan says. “Before my accident I was my own man. I lived in many different places and I was working in a machine shop. Now I like being here because I can do things that keep my hands busy.”

“When Alan first came out of the nursing home, he really wanted to be as independent as he could be,” says Emily Gracewski, Day Services Coordinator for The Resource Center. “Now he is always asking to help. That could mean making his own coffee, helping other members with things they’re doing, or helping to clean up. Today, I was carrying large boxes of paper towels out to the car, and I turned around and there was Alan carrying a box. No one asked him to help, he just offered.”

The Resource Center is a place where Alan is naturally supported and pushed to try things he may not have done before. “We give him a lot of freedom to make his own decisions,” Emily explained. “Decision making – even something as basic as choosing what color socks to wear – is a huge piece of one’s own independence.”

“I feel trust and love here, more than where I was before,” Alan says. “I see myself progressing so I can keep moving forward with a full day of good things. That’s independence for me.”

A new level of independence has been a game changer for Victoria, who, until recently, was a resident of an MHA Youth In Transition residential program. Now, with guidance and support from Florence Johnson, MA, LMHA, Clinical Case Manager for MHA, Victoria has moved into her first apartment.

“Being in my own apartment is a lot better than living in a program,” says 20-year-old Victoria, confidently. “I love living by myself. Maybe that has something to do with being in foster care since I was about 2, and getting adopted when I was 4, and then going back into custody when I was 8. Being on my own is better.”

MHA’s Youth In Transition program helps young adults to overcome barriers or personal challenges as they develop skills and build networks they need to live their best life, with the greatest degree of independence. The program serves transitional aged youth 18 to 22 who are experiencing cognitive or mental health challenges or related conditions. Victoria had many years involvement with the Massachusetts Department of Children and Families (DCF) during her childhood, and in her young adulthood faced some challenges. With guidance and support, notably from Florence, she is now living independently in her own apartment and working full-time.

“With all the good things I see in Victoria, I know she will flourish on her own and do really well. She is a go-getter who always tries, and that’s an important part of succeeding in life.”

Victoria continues to connect with Florence two or three times a week, and they text regularly as well. “Victoria has done such a great job and I’m so pleased with her progress,” says Florence. “I knew she would excel when she left Youth In Transition. She was ready.”
A big part of what MHA is about is helping folks to live their best life in a way that matters to them. For the folks we serve, that’s a lot of what it means to be independent.