John Moore is an award-winning artist. He typically paints from imagination rather than from reference. His subjects are big and bold, such as volcanoes and fanciful creatures, and his color pallet favors red and black. Dozens of his paintings, mostly on canvas or poster board, are displayed throughout his residence. “I paint a lot and I draw a lot,” he explained. “I’m creative.”

For the past seven years, John has lived at a group home in Wilbraham for adults who have developmental disabilities. This residence, like dozens of others in western Massachusetts, is part of MHA’s Division of Integration and Community Living. Since MHA’s founding in 1960, the organization has continually developed innovative ways to move people out of institutions and into the community. MHA’s continuum of housing and support options helps individuals challenged by mental health, developmental and intellectual disabilities, acquired brain injury, substance use and homelessness.

With the support of MHA staff, John and his three housemates live together, each pursing their individual goals and interests. Among John’s passions is creating art, and recently his talent was recognized at the state level. Each year, the Association of Developmental Disability Providers (ADDP) produces a calendar that features stories from ADDP members and pictures of every Massachusetts legislator on their birthday. To grace the cover of the calendar, ADDP sponsors a contest for original artwork created by persons served by member organizations. John learned about the contest from Amy Porchelli, the art therapist at Viability, a day program he attends.

“John was excited about the chance to enter his artwork in the contest,” said Charlene Champagne, Program Supervisor for MHA. Charlene has worked 14 years at the Wilbraham group home where John resides. “John loves to draw and paint, and his artwork often reflects his fascination with volcanoes and the scary creatures he loves so much. But this time, he wanted his work to reflect the contest’s theme: collaboration.”

John’s idea was to create a mixed media piece that includes puzzle pieces ready to be joined together and words such as Believe, Inspire and Together. He followed the rules carefully and submitted his artwork for consideration. To John’s delight, he won the contest. What’s more, he was invited to Boston so his accomplishment could be officially acknowledged.
On January 21, 2020, John traveled to Boston for the ADDP Legislative Luncheon in the Great Hall of the Massachusetts State House, accompanied by Charlene and Amy, as well as Brad Pellissier, Program Director for Viability. During the luncheon, John was formally recognized as the 2020 Calendar Cover Artist by Ellen Attaliades, the CEO of ADDP. John’s bio was read and his picture was taken with ADDP Legislator of the Year, Representative Josh Cutler. Jane Ryder, Commissioner of the Massachusetts Department of Developmental Services (DDS), was among the dignitaries in attendance.

As the 2020 Calendar Cover Artist, John also received a $200 prize, which he plans to use to have one of his fanciful creatures made into a pillow. “It will have big horns, big pointy ears, a lot of eyes and a lot of very long arms,” he explained. John’s other interests include fascinating facts, science and science fiction, exercising, and dancing to rock and roll music. He gives back to his community by volunteering at an area food bank.

DDS creates opportunities for individuals with intellectual and developmental disabilities to contribute to and participate in their communities as valued members.

The MHA group home where John lives receives funding through DDS. MHA is also a member of ADDP. 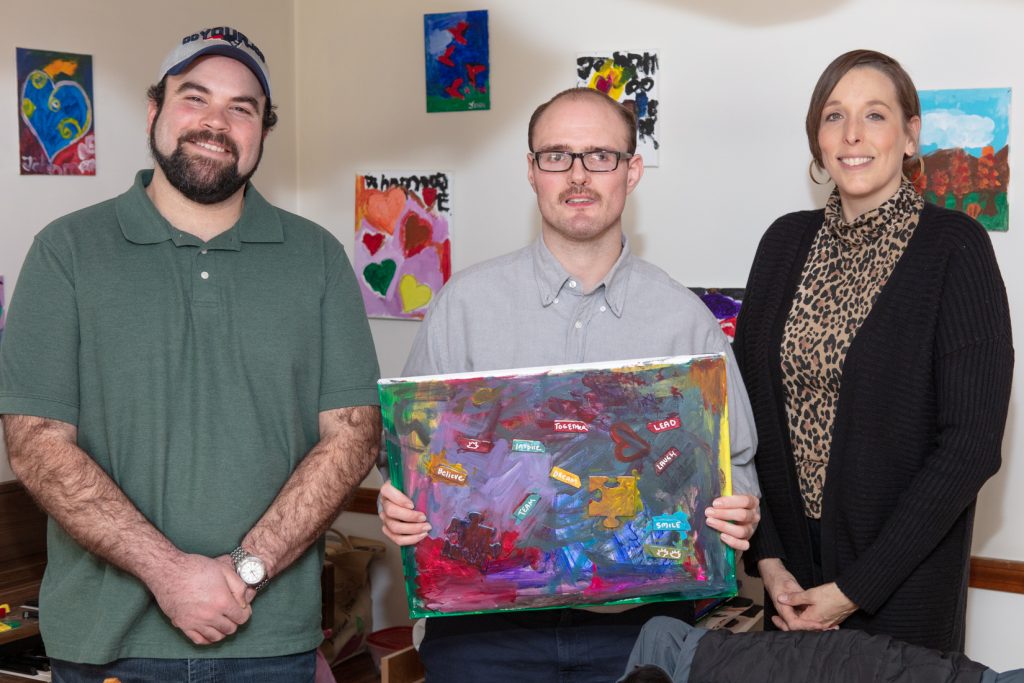