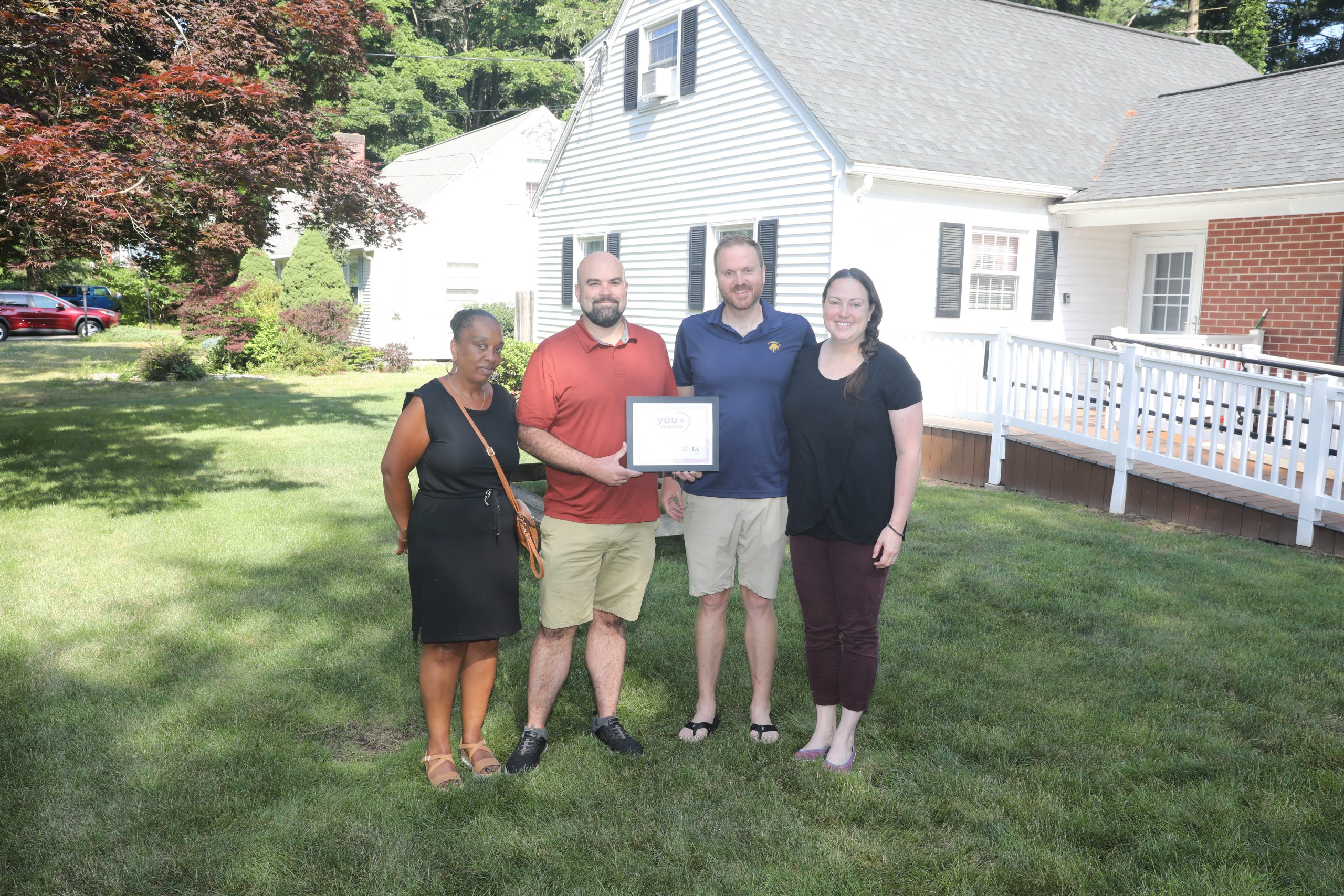 SPRINGFIELD – Wilbraham residents Chelsea Corr-Limoges and husband Zachary Limoges were honored with the Mental Health Association’s “You Matter!” award on Friday, July 8th for their fast response when an MHA staffer experienced a sudden, critical medical emergency outside an MHA residential program.

MHA created the award in 2018 to highlight employees and members of the community committed to making a difference in the lives of others and whose kindness has resulted in an immediate impact.

The couple, with 21-month-old son Nolan in stroller and dogs Marshall and Ruby on leash, were about to embark on a late afternoon walk when they heard a shout and saw an individual collapse in the driveway across the street from their house. The residence opposite is one of MHA’s homes for individuals with developmental disabilities, and the person on the ground, to whom Zach ran to help, one of its residential support specialists.

“It was quickly apparent something was wrong,” said Chelsea who pushed the dogs into the couple’s gated backyard and yelled immediately toward a neighbor to ask if anyone had medical training.

“Zach was already on with 9-1-1, giving information on the location and they were clearly instructing Zach what to do. By the time I turned around, Zach had made him comfortable. The EMTs arrived and took over.”

“The staff member was the caretaker at the time,” Zach said. “Chelsea went inside the residence and found a number for MHA and volunteered to look after the residents until another staff member arrived, and I looked after Nolan.”

Chelsea added that Jim, one of the residents who had been outside, joined by another resident showed her where the home’s office was and that helped her find the on-call number.

“It was stressful, but I was able to be reassuring,” Chelsea said. “Mike, one of the residents, plays the drums so he entertained me with a song, and I got a tour of the house and saw another resident’s artwork in the kitchen.”

She added that other neighbors offered to help, too.

“It was a neighborhood affair,” said Chelsea whose family have lived across from the MHA residence for two years.

Fred Destromp, program director of MHA’s Integration and Community Living Division that serves individuals with developmental disabilities, said its staff member was “OK and had returned to work.”

“MHA is very grateful for the community and their support and their neighborly attitude,” said Fred who oversees four of the division’s residences.

Chelsea said the couple was glad to learn the staff member is fine and that they are “very touched” to receive the “You Matter!” award.

“We are very touched and very honored,” Chelsea said. “We are just happy we were there and would do it again in a heartbeat.”

Chelsea is an Assistant Professor of Environmental Science in the School of Arts and Sciences at Springfield College and Zach, Senior Systems Administrator, works remotely in IT for Punahoe, a school in Hawaii. The couple, who have lived in other states, like their Wilbraham neighborhood and their four, across-the-street neighbors, ranging in age from 36 to 72, whom they call “friendly” as well as the MHA staff.

The most recent encounter has taught them that as a family responding to an emergency – young Nolan kept himself entertained with the arrival of a police cruiser – they “work well together.”

“I went into pre-term labor with Nolan, that was a bit of a medical situation as well, and rather recent,” Chelsea said. “So, I guess we work well together. We had him at 28 weeks. It was very unexpected. My water broke. My sister still comments on how calm we were.”

Kimberley Lee, MHA’s Vice President of Resource Development and Branding added, “In any neighborhood where we operate a residential program, our goal is to always assimilate into the fabric of the community. To see and be seen as neighbors. Chelsea and Zach’s response to our urgent need was so incredibly special to MHA as it clearly demonstrates just how much we are member of that community.”